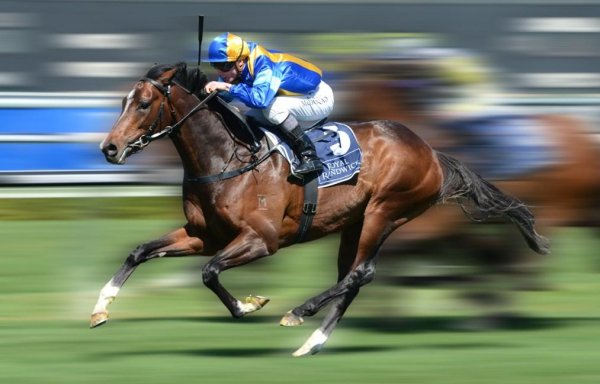 Dundeel retires to as a six-time Group 1 winner with over $5.3million in prizemoney.

Few horses are capable of progressing from a New Zealand 2YO maiden win to Sydney 3YO Group 1 success in five starts. Dundeel did it within six months in 2012, culminating with victory in the ATC Spring Champion S. G1.

Then in the autumn of 2013 Dundeel made history. In the Group 1 Randwick Guineas over 1600 metres he once again defeated Proisir who had run so bravely in the Spring Champion. Two weeks later he romped home by almost 7 lengths in the Group 1 Rosehill Guineas, giving him a chance to become the first horse in history to win all four Group 1 3YO races in Sydney.

Hall of Famers Phar Lap, Tulloch, Kingston Town, Strawberry Road, Octagonal, Flight and Peter Pan all won the Australian Derby but none of them won it the way Dundeel did. He won the race by 6 lengths and running his final 400 metres faster than world champion sprinter Black Caviar in the 1200-metre T.J. Smith Stakes on the same day.

Dundeel was subsequently awarded an international rating of 121. That ranked him second only to Ruler Of The World in the Intermediate 3YO category on the official 2013 Longines World’s Best Racehorse Rankings. He was also named the 2013 Champion New Zealand 3YO & New South Wales Champion Horse of the Year.

It looked like the top of the mountain, but those Derby-winning Hall of Famers had all returned at four to win at weight-for-age.

Dundeel joined them when he out-fought and out-sprinted the previously unbeaten Atlantic Jewel in the Group 1 MRC Underwood Stakes over 1800 metres at Caulfield in September 2013.

Dundeel then returned to Sydney in the Autumn of 2014 to add three Group 1 placings to his record before his bravura grand final in the Group 1 Queen Elizabeth Stakes at Royal Randwick over 2000m. It was a contest worthy of the inaugural running of The Championships and Dundeel’s heroic defeat of Sacred Falls & Carlton House earned him the status as the champion of his generation.

John Messara says, “Dundeel was a racehorse of the highest class, effective at Group 1 level from 1600 to 2400 metres, with immense natural athleticism, a high cruising speed and a devastating turn of foot. These attributes, combined with his undaunted toughness and courage, make him this year’s most exciting stallion prospect. We are delighted to offer him to Australian and New Zealand breeders.”

The Bloodlines of a Champion

In the flesh and on the track Dundeel is a complete expression of the genetics that have shaped the very best Australasian thoroughbreds of the past half-century: Northern Dancer, Sir Tristram and Star Kingdom.

By the legendary Sadler’s Wells, Dundeel’s sire High Chaparral was a six-time Group 1 winner at 2, 3 & 4 from 8 to 12 furlongs/1600 metres to 2400 metres. High Chaparral is proving to be an exceptional sire with nine Group 1 winners, five of them in Australia, including Dundeel and international superstar So You Think.

Like Dundeel, his grand-dam Staring was a champion 3YO who achieved classic success, in the Group 1 New Zealand Oaks, and returned at four to triumph in Group 1 weight-for-age company.

Staring’s paternal grand-sire Luskin Star epitomised the precocity and class of the Star Kingdom sire-line, as a champion 2YO whose 7-length victory in the 1977 Golden Slipper remains unequalled.

The cross of Sadler’s Wells line stallions over Danehill mares has been exceptionally strong globally, producing champions such as Frankel, Tuesday Joy and Teofilo. This makes Dundeel perfectly suited to the abundance of Danehill line mares in Australia.