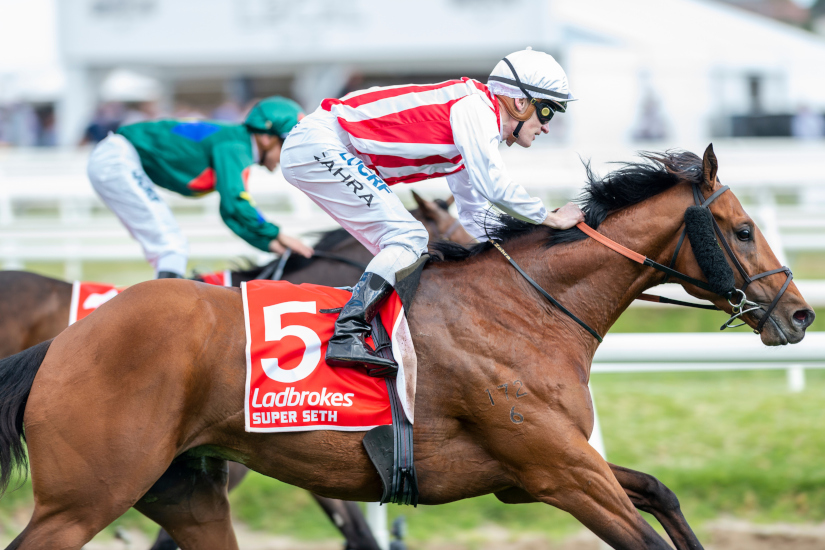 It was truly an exceptional Saturday for Dundeel, sire of Caulfield Guineas G1 winner Super Seth, Spring Champion G1 2nd Castelvecchio & Silver Eagle winner The Inevitable. We are privileged to stand him and very excited about his future!

It takes serious firepower in the white-hot competition of modern Australian racing for a stallion to jump 28 places into third spot on the General Sires’ premiership in a single day. (Super Seth pictured - was a spectacular winner of the $2 million MRC Caulfield Guineas G1.)

That’s what Dundeel did on Saturday, thanks to three outstanding performances by Super Seth, The Inevitable and Castelvecchio.

They added more than $1.6 million to Dundeel’s prizemoney which now stands at $2.6 million, compiled by 52 runners, the smallest number fielded by any stallion in the top 15. The champion son of High Chaparral is also the new leader on the 3YO Sires’ table with $1,799,775.

I just lost my spot around the bend, when I finally got him to balance and level out, he really let rip. He’ll get even further I think, it’s just great because I’ve had a bit to do with him and I know a few of the owners. It’s great to see the plan all come together, he’s still learning, the sky’s the limit.
– Super Seth’s jockey Mark Zahra

Super Seth joins a substantial list of Group 1 winners, including Atyaab (also by Dundeel), Secret Agenda, Master Of Design and Fashions Afield bred by Arrowfield’s partnership with John Leaver. The colt was sold for $280,000 at Inglis Easter to Dean Hawthorne for leading owner Jonathan Munz and Anthony Freedman trains him.

Twenty minutes after the Guineas, Castelvecchio (ex St. Therese by Dehere) launched a powerful run from the rear of the field in the $1 million ATC Spring Champion S. 2000m G1, but just failed to emulate his half-sister Maid Of Heaven’s 2018 victory and was second, beaten a length by the favourite Shadow Hero.

Already a Group 1 winner at two, Castelvecchio has returned around 12 times his purchase price to Ottavio & Wendy Galletta who purchased him from Arrowfield  for $150,000 at the Inglis Classic Sale.

The next race at Randwick was the inaugural running of the $500,000 Silver Eagle and 4YO The Inevitable (bred by Tori Park Stud from the King’s High mare Gift Bouquet)  made it memorable for his trainer Scott Brunton and a large group of enthusiastic Tasmanian owners.

A bid of $90,000 by David Brunton secured The Inevitable from the Cornerstone Stud draft at the Magic Millions Adelaide Sale. Eight wins, three of them black type, and almost $700,000 prizemoney have comfortably covered that outlay.

The diminutive gelding is not to be under-estimated in the $7.5 million Golden Eagle, as his jockey warns:

He’s a fighter, my word he’s a little tiger. For his size, his stride is twice as long as you expect it to be. He just covers the ground.
– The Inevitable’s jockey Nash Rawiller