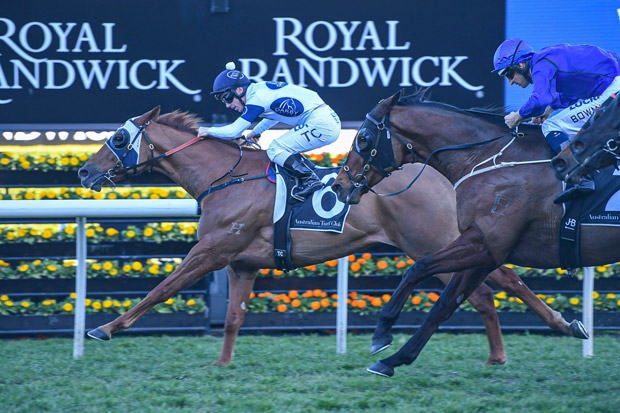 The first Group 1 race of the season was run at Randwick on Saturday and by season's end it's likely to have provided the most unlikeliest of winners.

The well-exposed 6yo gelding Samadoubt had won nothing grander than the Listed Canberra Cup in 34 previous starts but under a front-running masterpiece by Tim Clark the son of Not A Single Doubt held on to defeat the triple Group 1 winner and near $7 million earner Happy Clapper (Teofilo) by half a length with a further neck back to Invincible Gem (I Am Invincible) who edged out the favourite Avilius for third. (image Steve Hart)

Trained by Bjorn Baker for the Darby Racing syndicate, Samadoubt advanced his record to 9 wins, 6 seconds and 3 thirds from 35 starts with earnings of $795,760.

That's a good return on the $40,000 Darby Racing needed to secure the son of Not A Single Doubt from the Riversdale Farm draft at the 2015 Inglis Classic Yearling Sale.

"From Winx to Samadoubt, hasn't it got a good ring to it," Baker joked.

"He's a very good horse. He ran in the Breeders' Plate as a two-year-old and we left that day disappointed but he's been a great ride for the owners."

A three-quarter brother to the Group III placed Thin Red Line, Samadoubt is the best of five winners out of the Gold Fever (USA) mare Isadora who is a half-sister to the Group II VRC Bloodhorse Breeders' Plate winner Apollo Wonder (Rory's Jester).

Isadora died in October last year. Her final foal is a yearling filly by Rothesay.