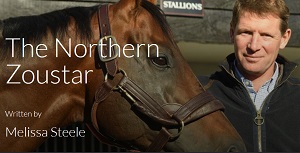 Most European breeders first clapped eyes on Zoustar as he paraded among the clinking champagne glasses of the inaugural Goffs London Sale in 2014. It was a stepping out into London Society, of sorts, for the Australian sprinter, but it wasn’t meant to be that way.

When Sheikh Fahad Al Thani bought into Zoustar, after he skipped to victory in the G1 Coolmore Stud S. at Flemington, he had Royal Ascot in mind and the G1 Diamond Jubilee S. was put firmly to the top of the agenda.

Alas, a minor setback before the Royal meeting meant that the dual Group 1 winning sprinter never got to showcase his ability on the Ascot turf and it would be five years until he’d be seen again in the UK; the next time as a stallion, taking up duties at Tweenhills Stud in 2019. 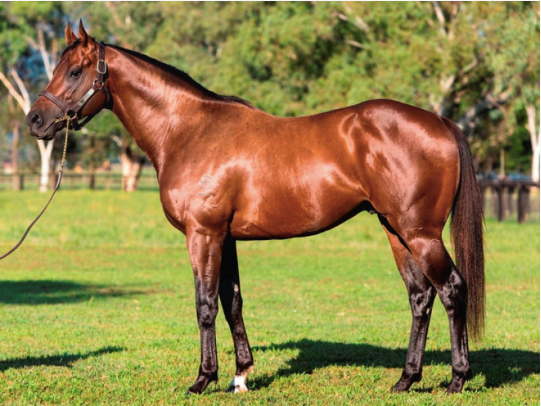 Returning to the Northern Hemisphere as the hottest young sire in Australia, Zoustar had a CV that was as jam-packed with credentials as his current book of mares and, as Qatar Racing’s David Redvers explains, it was more than worth the wait.

“I felt very strongly that as he’d failed to get the opportunity to showcase his talents (in England) on the racecourse due to a last minute setback before he was meant to run in the Diamond Jubilee, rather than get him off to a half-cock start here it would be better to let him sink or swim on his own merits as a stallion first.

“In our wildest dreams,” continues Redvers, “we couldn’t really have expected him to make such an immediate impression with his first runners and it was when he sired the first three home in the Coolmore (Stud S. in 2018) that it became an absolute no brainer for him to come up here and get established.”

Success in the G1 Coolmore Stud S. at Flemington appears to run in the family. Zoustar won the race in 2013 - as his ill-fated sire Northern Meteor and grandsire Encosta De Lago had done before him – and in 2018 he sired the trifecta, with only his first 3-year-olds. An unprecedented achievement by any freshman sire.

News travels fast in the bloodstock world and with Zoustar’s ever growing list of high achievers on the racecourse and results in the sales ring to match, it didn’t take long for European breeders to want in on the action.

“The Australian racing and breeding program, in the last 50 odd years, has almost entirely been slanted towards speed and sprinters,” explains Redvers. “Therefore, the very best young stallion in Australia who also happened to be Champion 3-year-old sprinter himself was always going to capture the imagination up here, where our own breeding program is also becoming more and more speed oriented.”

“He was completely oversubscribed last year at £25,000,” explains Redvers, “and he’d done nothing but further enhance his reputation since we set that fee the year before, in fact, his fee had more than doubled in Australia in the same period and gone up to $154,000. So even at £30,000 he represents outstanding value and the fee increase has proven to be a wise decision because this year he’s once again completely fully booked.”

It might be tempting then to increase the book size of the young stallion who has kept the phone ringing off the hook, but in the interests of longevity, Redvers is keen not to.

“Because he’s hugely popular in Australia and here,” he says, “we’ve limited his book because we want the horse to be around for the next 15 years plus, so we don’t want to be covering vast books anymore. We want to be covering a really good, strong, commercial book of mares and by limiting his numbers it will hopefully increase his longevity. He covers 125 here and he covers 200 at Widden Stud in Australia. At some point in the future that may flip, but for now wherever he’s standing at the greater fee, he’ll be covering the greater book.”

"We want to be covering a really good, strong, commercial book of mares and by limiting his numbers it will hopefully increase his longevity." - David Redvers

It might be restricted but Zoustar’s current book of 125 mares makes for a very good read, half of which are either stakes performers or the dams of stakes performers. Naturally, Qatar Racing are heavily supporting their sire and among the 18 black type performers they are sending to him are Group 1 winning sprinter Mabs Cross (GB), Royal Ascot winning 2-year-old Kiyoshi (GB), Group 2 winning sister to Fairyland (Ire), Now Or Never (Ire) and Lightening Pearl’s (Ire) Group 3 winning daughter, Lightening Quick (GB), to name only a few.

A commonality among the group, aside from performing at the highest level, is speed; a trait which Redvers believes works best with the young sire. Given Qatar Racing’s involvement with two of Zoustar’s best progeny in Australia to date, namely triple Group 1 winning filly Sunlight and the G2 Champagne Classic winner Zousain, we might do well to take note.

“I’ve always been a great believer in breeding type to type,” says Redvers. “We bred Sunlight who is one of the best sprinters in the world and will be coming up to Royal Ascot this summer. She’s out of exactly that type of fast mare. We bought Zousain as a yearling, but incidentally he is out of a Group 3 winning sprinting filly that I’d previously raced up here myself. So Zoustar’s first two in the Coolmore were both out of mares that we’ve had something to do with in the past or currently and both are very much sprinting types.

“We’ve been targeting and buying that type of mare,” he continues. “This year we’ve gone out and bought mares like Mabs Cross to go to him because that’s the sort of mare we’re convinced he will do best with and the type of quality race mare that he could be breeding stallions out of.”

Last year’s book of mares reads just as well as the one he has ahead of him and with several foals on the ground already, including Group 1 winner La Collina’s (Ire) chestnut colt, the word is very good.

“The thing about Zoustar’s foals is that he really stamps them,” says Redvers. “You can tell a Zoustar from fifty paces away because they all have his stunning head and impressive ears. Like his foals in Australia, they all have the most wonderful outlook and his long leopard-like walk.”

“You can tell a Zoustar from fifty paces away because they all have his stunning head and impressive ears." - David Redvers

“We’ve had quite a few (Zoustar foals) here,” he continues. “We’ve had the best part of a dozen already, out of some of our very nicest young speed mares. Mares like La Rioja who was fourth in the G1 Commonwealth Cup and Wind Fire who was third in the G2 Norfolk S. and was a Stakes winning two and 3-year-old sprinter. Also, Beldale Memory, who won the Marygate S., had a gorgeous foal the other day.

"As I said before, we’ve purposefully gone out to cover him with the sort of mares that he’s done particularly well with in Australia which are the precocious speedy mares and those are three good examples who have already produced outstanding foals this year. We’re in a lovely position, having been in a very bad position, that we’ve now got a lot of very nice Zoustar and Roaring Lion foals outside.”

The “very bad position” that Redvers refers to is the loss of their four-time Group 1 winner and Horse of the Year, Roaring Lion (USA). Following his arrival in New Zealand for the Southern Hemisphere breeding season, the son of Kitten’s Joy (USA) had to be put down after a severe bout of colic. Covering just one book of mares in the UK, the ill-fated sire, also has his first foals on the ground this year.

“Roaring Lion has been an emotional rollercoaster from the start,” says Redvers, “and we’re not finished yet. He’s had the most extraordinary bunch of foals, very much the stamp, a lot with his head and most of them will end up being his colour. Already you can really see him in his foals so that’s meant that it’s been a very bittersweet Spring so far.”

Tweenhills Stud are due a bit of luck and with a strong hope that Zoustar can go some way towards filling the void left by Roaring Lion, things are looking up for the future. We might have a while to wait until his first Northern Hemisphere-bred offspring hit the racecourse, but in the meantime, Europeans can look forward to seeing the best of Zoustar’s Australian progeny when Sunlight lines up at Royal Ascot this summer; fulfilling a date that her Champion sire sadly never got to.