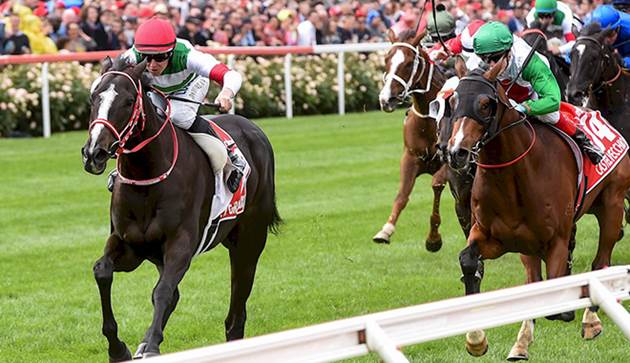 Castelvecchio has been rated on par with The Autumn Sun for his three-year-old spring deeds, with the colt gaining a 120 world rating in the latest update for his second placing in the Cox Plate.

Castelvecchio's 120 ranking in the Longines World Best Horse Rankings places him equal with The Autumn Sun for his 2018 Caulfield Guineas victory but behind Sepoy (123 in 2011) and So You Think (122 in 2009) for spring three-year-olds over the past decade.

Such world recognition was well received by Castelvecchio's trainer Richard Litt on Friday but the Warwick Farm-based horseman said the colt's climb up the world rankings has not peaked.

He said the Rosehill Guineas and Queen Elizabeth Stakes in the autumn were major targets for the Dundeel colt, who he expects to stamp himself a star.

"I promise you, there is a lot of improvement in him," Litt said. "We haven't got to the bottom of him yet. Wait until next time.

"I think he's got massive improvement in him. Just a few things went a little wrong last prep - not majorly wrong but they didn't flow early - but now he's proven himself a middle-distance staying type horse, we'll get that right. It's very, very exciting.

"The older he gets, the more versatile he's getting. He was ridden well (in the Cox Plate) by Craig (Williams), He had him a little more forward and he travelled enormous - a lot closer than what he usually does."

Arrowfield Stud have bought into the colt, who has been enjoying a break since his near heroics in beating all but the Japanese mare Lys Gracieux in the Cox Plate.

"He's out spelling at the moment and he'll come in mid-December after a five-week spell and then a nice slow preparation into the autumn," Litt said.

Lys Gracieux was rewarded for her Cox Plate triumph by being anointed Japan's second-best horse on the world ratings at 121 behind Almond Eye at 124.

Three horses share the top rating ahead of one further update to end 2019, with Crystal Ocean, Enable and Waldgeist all at 128.

Nature Strip appeared at the pointy end of the rankings for the first time, registering a 122 for his Darley Sprint Classic win, placing him equal 17th in the world.