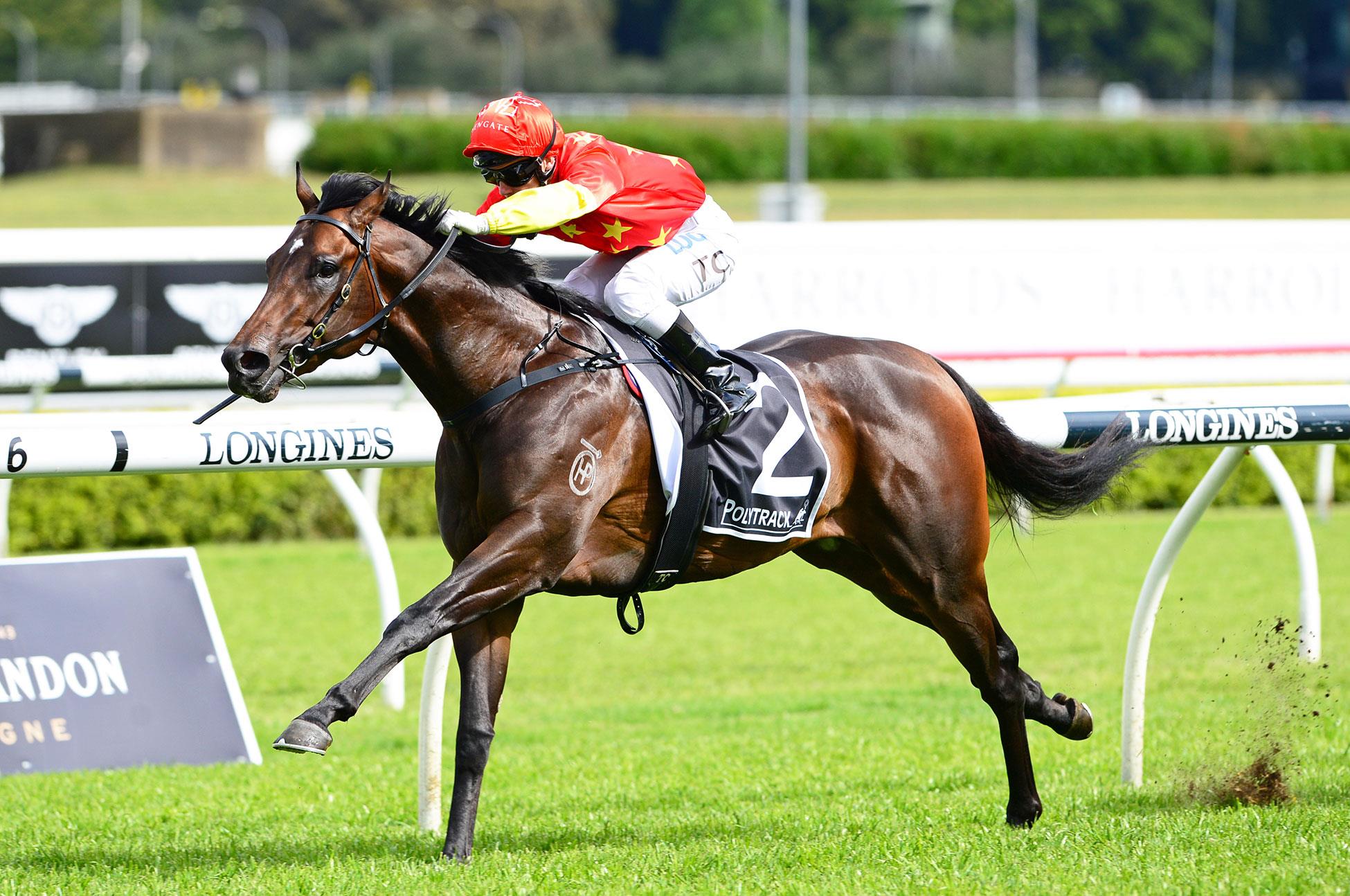 Group  2-winning  sprinter  Cosmic  Force  will  become  the  first  son  of Deep Field (Northern Meteor) to  stand at stud when he joins his sire on the Newgate Farm roster this spring, commanding a fee of $16,500 (inc GST).

Deep  Field,  who  was  retired  to  Newgate Farm in 2015, has had two crops to race so far. He currently leads the Australian second seaso sires table by winners, while he is also the leading overall sire of three-year-old winners in Australia this season.

His  talent as a stallion was once again to the fore on Saturday when his daughter Xilong won the Euclase Stakes (Gr 2, 1200m), stamping herself  as a genuine contender for The Goodwood (Gr 1, 1200m) Saturday week, while Fituese made it four wins from six starts with an emphatic win on the Kensington track at Randwick.

Cosmic Force, though, has been his leading light from his first crop. A Group winner at two and three for Newgate and their partners, racing in the China Horse Club colours,  Cosmic Force retires with a similar profile to Deep Field.

You’ve got a horse here that’s going to stud, just like Deep Field, he’s a Group 2 winner, he’s a race record holder, he holds the record for  a  winning margin in a two-year-old Group race in Australia this millennium,” Newgate’s director of stallions Bruce Slade told ANZ Bloodstock News yesterday.

“So he’s obviously shown plenty of X-factor and he retires to stud at $15,000 plus GST which I think will be seen as value by the market.“We’re delighted with the job that Deep Field is doing and it’s terrific to  think  that, from his first crop, he’s  already  got  a  commercial  stallion  prospect in Cosmic Force going to stud this year. He’s just a young stallion that’s  obviously a leading second crop stallion, he’s the leading sire of three-year-old winners in Australia and, on the data that we look at, he’s certainly on track to make his mark in the stallion ranks of Australia for a long time.

“We believe that Deep Field is going to be at Newgate for a long time and  he’s  going  to  be  a  very  important  contributor  to  the  foundation  of  Newgate and its long-term success.”The numerous parallels between Deep Field and his son Cosmic Force are striking and bode well for the three-year-old’s future at the Henry Field-founded stud. “Both were expensive first-crop yearlings from their respective sires: Deep Field was the highest-priced Northern Meteor from his first crop, while Cosmic Force was one of the highest-priced colts by Deep Field,” Slade recalled.

“Certainly, in Henry’s opinion, he was the best-looking son of Deep Field from his  first  crop, and so he was purchased by Newgate and their racing partners.  And he’s given us an enormous thrill.”Purchased  for  $180,000  from  the  2018  Inglis Classic Yearling Sale for a partnership that included China Horse Club,  Newgate and WinStar, Cosmic Force is out of the Commands mare Little Zeta, which makes him a half-brother to Group 3 winner Onemorezeta (Onemorenomore). Further back, his family includes the late Sebring (More Than Ready).

As  a  two-year-old,  the  Peter  and  Paul  Snowden-trained Cosmic Force was a maiden winner at his first start at Newcastle. From then on, he was thrown in against some of the best two-year-olds  of  his  generation,  finishing  second to Group 1 winner Bivouac (Exceed  And  Excel)  in  the  Lonhro  Plate  (Listed,  1100m), splitting Group 1-winning colts Microphone (Exceed And Excel) and Castelvecchio (Dundeel) in the Skyline Stakes (Gr 2, 1200m) and starting favourite in the Golden Slipper Stakes (Gr 1, 1200m).

However, it was Cosmic Force’s  even-length win in the Pago Pago Stakes (Gr 3, 1200m) a week before the Golden Slipper that really stamped him as a two-year-old of immense potential.

“We’ve gone back to the beginning of the millennium to see if there’s been  a  two-year-old  stakes  race  won  by  a  bigger  margin  than  seven  lengths  and  there  hasn’t  been,”  Slade said.  “He holds the record for the biggest winning margin of a Group race for juveniles in Australia and that was just a demonstration of the X-factor that was a hallmark of his career.

“He broke the race record in the Roman Consul, a race that has proven to be a stallion-launching race,” he said. “On the back of that, he started one of the favourites for the Coolmore as well. He’s a horse that the market certainly rated a proper Group 1 horse and he retires to stud, much like Deep Field, not having won his Group 1 but having shown real X-factor in his brief career.

”Deep Field has proven a commercial success early in his stud career and Slade forecasts a similar trajectory for Cosmic Force.

“Cosmic  Force  retires  at  $15,000  plus  GST  which just seems like a no-brainer when you think about it,”  he said.  “Deep Field at the same stage retired at $20,000 plus GST and breeders did so well by supporting him all the way through. He was a horse that had a mean of five times his service fee all the way through, which is unheard of, and this season he took that to another level by, with his third crop, averaging $150,000 off a $20,000 fee.

”Cosmic Force will also be supported by some of the most prolific breeders in the country who are involved in his ownership, like China Horse Club, Go Bloodstock and his breeder Bob Hannon.

“We’ll be giving Cosmic Force the identical support that we gave Deep Field in his first crop,” Slade said. “By that, we mean that we’ll be sending him A-class mares.  We’ll  be  treating  him  like  a  $30,000  to  $40,000  stallion  as  opposed  to  a  $15,000 stallion and we’ll be supporting him accordingly. And of course we’ll give him identical support in the sales ring. There is no doubt that the Newgate group and our partners will be searching for the best Cosmic Forces from his first crop.

”Peter Snowden added:  “For me, he was a ready-made racehorse.  When he was on song, he was dynamic. There’s no reason why Cosmic Force won’t be  a  force to be reckoned with; he was a good type, he had pace, he was sound. He’s got a good mindset to put into his yearlings and I think he has all the ingredients to make good racehorses.

“He was the best three-year-old we had and in my mind he stays at that level. He was a fast horse with a great turn of foot and he was just a magnificent type with good athleticism.

”The Newgate operation has, in recent weeks, highlighted some of the factors that they identify in a stallion prospect: elite racing ability, pedigree, physicality  and commercial appeal.  Slade feels that Cosmic Force is a prospect that ticks all of the boxes.

“When people see him, I think people are going to be absolutely in awe of him as a physical specimen,” Slade said. “He’s just a beautifully put together horse with lovely quality and action and size and strength. We’re really confident of that and confident that breeders can do very well by using him, both from a  commercial point of view and from a perspective of producing racehorses.

“We have a few shares available at a really attractive price. We are offering them to good breeders that are keen to support this horse like us over the first four years. We’re going to make those available to the marketplace, to those key breeders who support us and who are interested, because we’re confident that if we can give this horse the best possible start at stud, he can join his dad and make an important impact on our farm long-term.