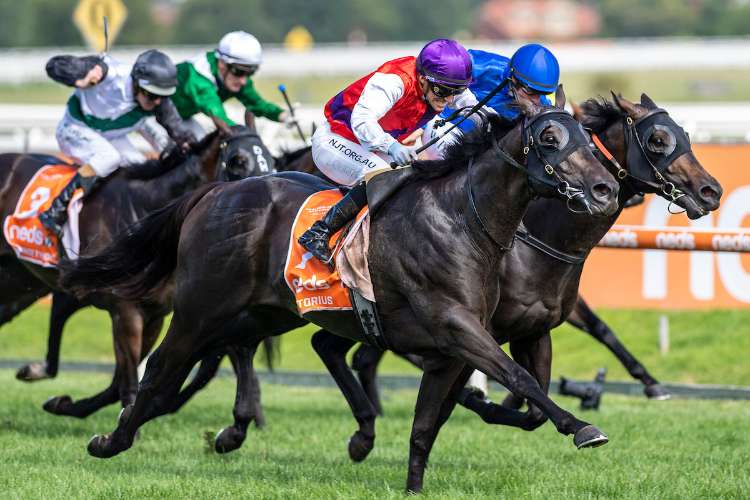 Artorius was able to do what his sire Flying Artie (Artie Schiller) was unlucky not to have done in 2016 and win yesterday’s Blue Diamond Stakes (Gr 1, 1200m) at Caulfield, providing father-and-son training team Anthony and Sam Freedman with their first Group 1 success together as a partnership.

After missing the start it appeared Artorius (2 c ex Gracie’s Lass by Redoute’s Choice), who was wearing blinkers for the first time, might have had his work cut out, but he defied the slow get away and flew home to produce one of the most impressive wins in the history of Victoria’s premier two-year-old race, crossing the line three-quarters of a length in front of Ingratiating (Frosted), having come from deep in the ruck under Luke Currie.

“It’s a big thrill,” said Sam Freedman. “There’s a big team behind this horse and to have the family colours on today is a nice touch.”

Bred by Greg Perry, Artorius was bought for $120,000 out of the Vinery Stud draft at the 2020 Magic Millions Gold Coast Yearling Sale and Freedman admitted that he wasn’t a huge fan of the horse at that particular stage of his life.

“He was very immature and looked six months off being a developed yearling,” he said.

“To be honest, I didn’t love him. Dad did and he’s a very good judge of a yearling. We thought he was very immature and so we gave him time over the last six months and now he’s turned into a beast.

“1200 metres is probably short of his best distance. We’ll probably be targeting a Guineas in the spring.”

Currie, who was forced to miss the ride on runner-up Hanseatic (Street Boss) in last year’s Blue Diamond after suffering serious injuries in a fall at Moonee Valley the previous night, admitted that he had found himself further back than ideal.

“I knew he was getting a good run through, but I thought he might struggle late, just because he hadn’t really had a chance to travel down and quicken,” the winning jockey said. “But he just kept coming. It was an amazing feeling the last 50 metres.”

The win was a second in three starts for Artorius, who has now bagged just shy of $1million dollars in prize-money.

Filling the two positions behind him were the James Cummings-trained pair Ingratiating and Anamoe (Street Boss).

“It was a very good effort. I might have hit the front a smidge early and was left vulnerable,” William Pike, rider of the runner-up said.

Anamoe was another length and three-quarters away in third and his jockey Damien Oliver said having blinkers applied for the first time might have tested him.

After a less than ideal lead up with lameness concerns days out from the race, race favourite Enthaar (Written Tycoon) finished in sixth position. Her rider Mark Zahra commended the effort from a wide barrier (14) and suggested that the high pressure nature of the 1200-metre contest tested her in the finish.

Artorius was identified as the Maiden of the Week in the January 21 edition of ANZ Bloodstock News. He is the second winner out of Gracie’s Lass (Redoute’s Choice), an unraced half-sister to another Perry-bred horse, Darley Classic (Gr 1, 1200m) winner Delectation (Shamardal).

The brown colt brought up Flying Artie’s first Group 1 winner in Australia and continued the exceptional run of success recently set by his young barnmates at Newgate Farm – Extreme Choice (Not A Single Doubt) and Deep Field (Northern Meteor).

Two-year-old racing was also a major focus at Rosehill yesterday with Golden Slipper Stakes (Gr 1, 1200m) hopefuls all taking their next important steps in the Silver Slipper (Gr 2, 1100m).

Carrying the Coolmore silks, Home Affairs (2 c I am Invincible – Miss Interiors by Flying Spur) gave champion trainer Chris Waller his first success in the race, as he built on his debut second in last month’s Canonbury Stakes (Gr 3, 1100m) and provided his sire with his 63rd individual stakes winner.

After sitting just off the race leader Direct (Siyouni), Home Affairs kicked clear for an impressive performance that placed him in serious contention for next month’s $3.5 million showdown on March 20.

“He’s got a great attitude and he’s doing everything right,” Waller said. “We had to use him up a bit early which was not ideal but it’s an important stepping stone for a horse like him with his pedigree.”

Waller was non-committal about whether the $875,000 Inglis Australian Easter Yearling Sale graduate and half brother to Caulfield Guineas (Gr 1, 1600m) runner-up Aysar (Deep Field) would have one more run before the Slipper.

“He’s a great athlete but at the same time he does well between runs,” he continued. “He’s the perfect racehorse for a trainer as you need to work them and prepare them properly so we will see how he comes through it and talk to the owners and see what they want to do.”

After being snookered most of the way down the straight, the Scott Spackman–trained Rocket Tiger (Cluster) managed to bullock his way out of trouble and ran on well to finish second in the race, a length and a quarter in front of third-placed Direct. The runner-up could now be aimed at Canberra’s Black Opal Stakes (Gr 3, 1200m) on March 7.