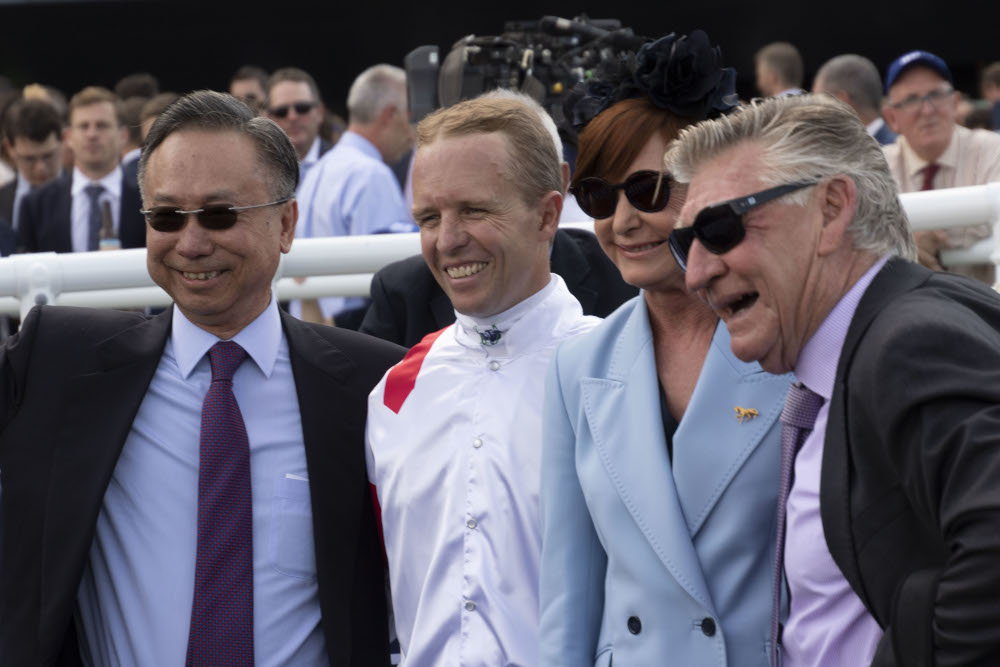 It is also a triumph for the stallion Mr Ho has backed with high-figure bidding in Australian sale-rings. His staunch support for Not A Single Doubt has now swept the marvellous son of Redoute’s Choice to the head of the General Sires’ Premiership with progeny earnings of $8.9 million.

With eight premiership trophies from the past 15 seasons, Arrowfield can fairly claim to be Australia’s leading home of Champion Sires. The Stud can now add “the leading home of Everest Sires” after Snitzel (sire of two-time winner Redzel) and Not A Single Doubt have supplied the winners of all but one of the first four editions.

Kerrin McEvoy celebrated his third victory from four rides in The Everest and acknowledged the horsepower he had under him.

“Full credit to my horse with that cover and that soft time of it early, he was really able to power when I asked him. Soon after straightening I was confident I was going to pick them up.

“Thrilled to get the horse over the line. Les has pulled a masterstroke off. He has kept him in training from the middle of since July and Carmel has attended to him like a baby. It has been fantastic. It is an unbelievable feeling to win another one.”

Mr Ho also deserves credit for his $400,000 purchase of the yearling Classique Legend from Tyreel Stud’s 2017 Inglis Classic draft, for racing him in Australia and for honouring his pledge to give 5% of any Everest prizemoney to the ATC Foundation. That amounts to $300,000 from the winner’s share of $6.2 million.

Classique Legend becomes Not A Single Doubt’s leading earner with $8.6 million from his six-win, 12-start career, including a pair of Group 2 victories and a Listed success.

He is the second foal of Tyreel’s broodmare gem Pinocchio (by Encosta de Lago), a winning sister of Champion 3YO Racing To Win, half-sister of Group 2 winner Purrealist and also the dam of Hong Kong Group 2 winner Aethero.

Mr Ho, who races Group 1 winner Southern Legend (also by Not A Single Doubt) in Hong Kong, and a large stable of young horses in Australia, has confirmed that the 5YO gelding will enter quarantine this week. He will then travel to Hong Kong where he will join the Caspar Fownes stable and contest the HK$22 million Hong Kong International Sprint G1 on 13 December.

Classique Legend is one of Not A Single Doubt’s 73 lifetime stakeswinners and, along with 3YOs Anders & Doubtland and 2YO Instant Celebrity, gives the son of Redoute’s Choice four Group winners so far this season.

Bred, raced and stood by Arrowfield, Not A Single Doubt is warmly celebrated as the stallion who rose from six seasons at a modest fee of $12,500 to six seasons among Australia’s top 10 sires, only to be forced by illness into premature retirement earlier this year.

There is no doubt about the consistent class Not A Single Doubt imparts and the last four books of mares he served at fees of $65,000, $80,000, $90,000 & $100,000 were the best of his career. Can the “little engine that could” muster the firepower and the numbers to give him a final throw at the stumps of a stallion premiership?

There is only one answer: yes, he can!