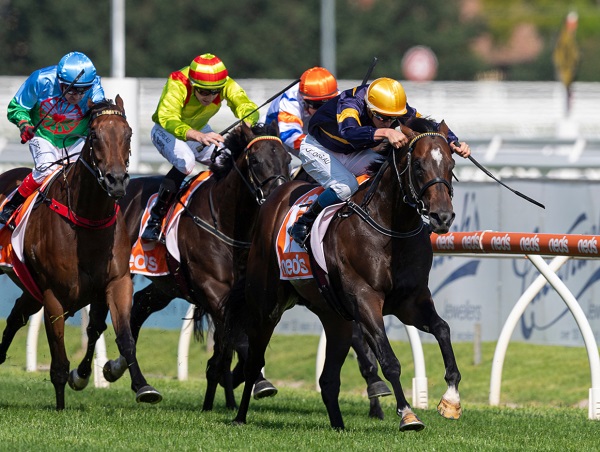 The 37th Group 1 winner for Redoute's Choice and the 13th Group 1 Inglis Easter graduate since 2013 for Arrowfield - that's 3YO colt Alabama Express...

The 3YO colt displayed the heart and acceleration to match his arresting good looks when he held off Fierce Impact & Kings Will Dream to win the $500,000 1400-metre weight-for-age contest in 1:22.07.

It was a striking performance, after Alabama Express raced three wide without cover for much of the race and then maintained a solid sprint down the home straight.

It was a particularly sweet victory for Michael Moroney, who celebrated his 50th Group 1 win as a trainer and made the decision to pitch the colt into weight-for-age company at his 7th start.

He said, “I’ve never doubted his class. He had the toughest run and still won and this was a legitimate Group One race.”

Jockey Michael Dee added, “He tries hard. He came off the bridle early, sat wide and he still kept on fighting to win.” Alabama Express, pictured as a yearling, is the 13th Group 1-winning Arrowfield graduate of the Inglis Easter Sale since 2013. (PHOTO: Georgie Lomax)

The colt’s record comprises four wins, including his debut 2YO success and  last October’s MRC Gothic S. LR, and more than $530,000 prizemoney.

Any thoughts that Redoute’s Choice’s stellar stud career would slowly wind down after his death in March 2019 have been banished by the 19 Group & Listed wins his progeny have compiled since then. They include Group 1 winners Danceteria (in Europe) & Loire (in New Zealand), as well as Alabama Express, and a highly progressive pair of 2YO colts, King’s Legacy and Prague.