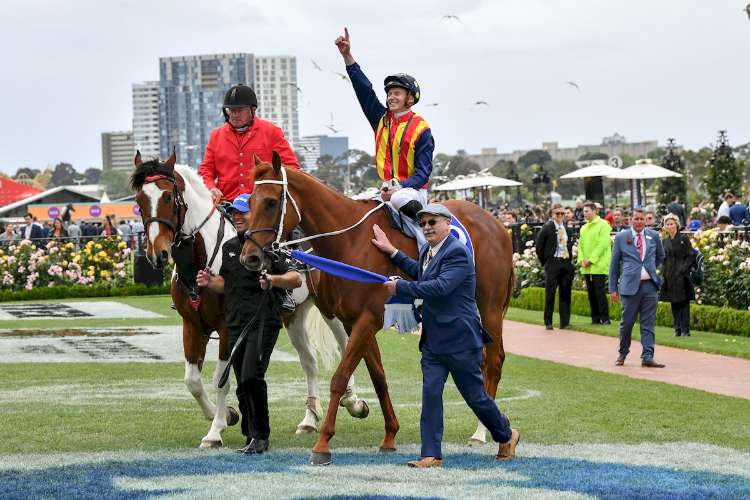 Nature Strip was at his brilliant best in the Darley-sponsored feature with an outstanding front-running display with trainer Chris Waller, jockey James McDonald and connections in exuberant moods.

The 5-year-old left five Group 1 winners gasping in his wake and longer-term thoughts immediately turned to a trip across to the other side of the racing world.

“That was pretty special, 3l in front and going well. It was good to watch that last 100 metres.” Waller said.

“The team are keen to get to Royal Ascot in June and there will be a few races before then.”

“The team are keen to get to Royal Ascot in June and there will be a few races before then.” – Chris Waller

One obvious Group 1 summer target would be the weight-for-age Lightning S. back over the 1000 metre course at Flemington in February.

“It’s an option and he would start a short-priced favourite in that,” Waller said. “We’ll get home and have a think about things.”

Nature Strip has won two of his four starts this time around and was a gallant fourth in The Everest from the outside gate.

“He’s been faultless and really gone to a new level this preparation,” McDonald said. “Credit to Chris and all his team for getting him to settle, they’ve done a great job.”

McDonald said from barrier rise that Nature Strip revelled in his work and was never in any danger of being reeled in.

“I reckon he could run seven furlongs, he was that good and so exciting. I’m thrilled for the horse and the connections.

“I reckon he could run seven furlongs, he was that good and so exciting. I’m thrilled for the horse and the connections.” – James McDonald

“He’s a star. It was awesome, he was airborne and floating over the ground. When I slipped him some more rein at the 300 he was still going through the gears and he ran it out so strongly.”

Nature Strip, who was bred by Golden Grove Stud Farm, is raced by a large syndicate that includes prominent owner Rod Lyons.

“That was an absolute buzz and we knew he’d run the 1200 metres. The horse is flying and what a run that was, fabulous,” Lyons said. “To win a time-honoured race such as this is a terrific thrill.”

Now a three-time Group 1 winner, Nature Strip is a half-brother to the Listed Fernhill H. winner The Barrister (Star Witness), who was a multiple winner in Hong Kong as High Volatility.

Their dam Strikeline (Desert Sun {GB}) was successful in the G3 Ian McEwen Trophy and twice at Listed level and she’s a half-sister to the G3 Eclipse S. winner Bashful Girl (Perugino {USA}).

The 3-year-old and last-start G1 Manikato S. winners Loving Gaby (I Am Invincible) chased Nature Strip in vain, but she still delighted David Eustace, who trains the filly with Ciaron Maher.

“We’re over the moon with her, very proud. It was her first effort down the straight and she’s a green filly, but full credit to the winner.”

In Her Time (Time Thief) turned her recent form around with a bold showing for third ahead of Alizee (Sepoy) and the defending champion Santa Ana Lane (Lope De Vega {Ire}), who had his chance, but lacked any zip in the closing stages.